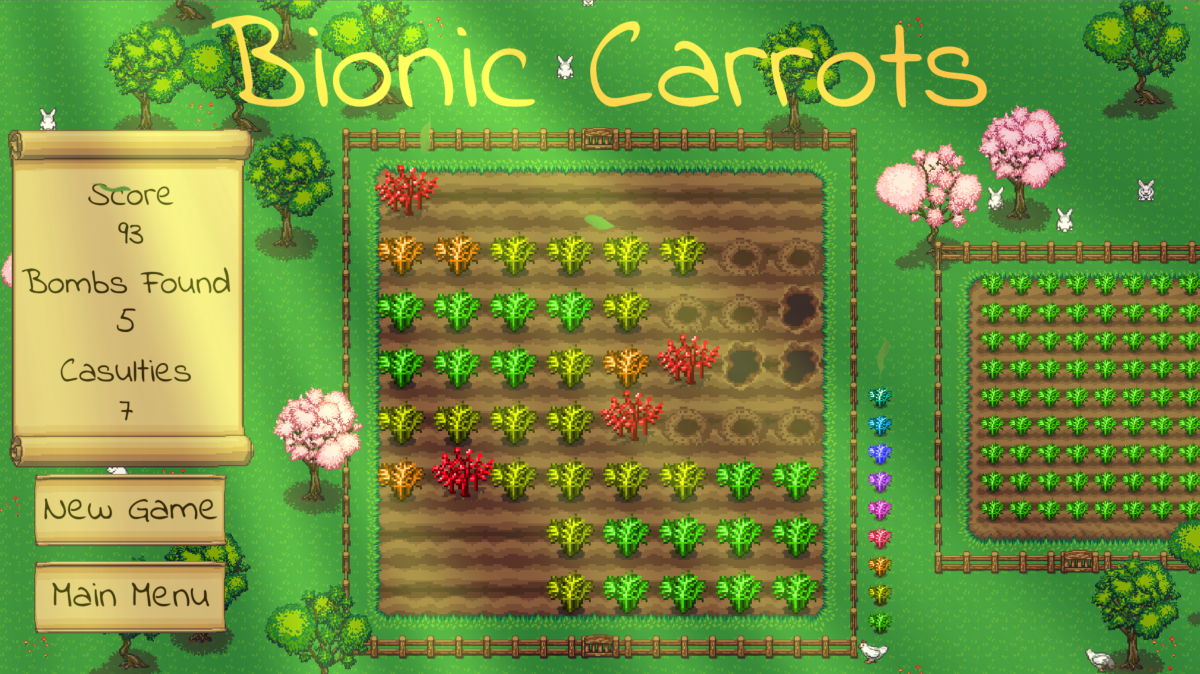 In the last post I wrote about the inspiration for Bionic Carrots. After designing the gameplay I moved into the final polishing phase of the games development.

This step was about improving game feel by giving better feedback to the player after each interaction, and also making the world feel more alive.

The video below shows the game before I started improving game feel.

One of the first things to notice in the video above is that the feedback from hitting a bomb isn’t really clear. Instead the player just sees the result: an explosion ‘crater’ and that the surrounding carrots are gone.

To change this I started to look into how animations is handled in Unity. I then used this to add a simple bomb explosion to the game.

This was the first results:

This already made a huge difference to the player, because it draws attention to any mistakes made in the game. It is then much more clear to the player when she/he loses points.

However, the chain reactions still seem somewhat static. So I added a small random delay to the animations starts for all chain explosions.

The explosions now looked like this (the colors are a bit off in this gif):

Following this I also added plant growing animations. When the player clicks to plant either a carrot (left-click) or special bomb revealing plant (right-click) the animations starts so it look like the plant i actually growing from the dirt.

Finally I also started to look into how particle effects can be handled in Unity. I used this to also improve the feedback the player gets when she/he positions the special bomb revealing plant correct.

So far the plant would be green by default, but turn red if placed directly on top of a bomb. However, I wanted to draw even more attention to the correct positioning.

Making the world come to live

The next step was to make the world around the level seem more alive.

To do this I started playing with particle effects and how they are set up in Unity.

I used this to add an overlay with sun beams and blowing leaves. It also became c

This new additions really made the world seem more alive. However, now the static green background really sticks out.

So I introduced a few bunnies and chickens and made a simple animal AI script so that they walk around between the trees and the game level.

Finally I also added a few sound effects and some background music to the game. The game now looks like this:

By comparing the final video with the first, it should be clear how the game feel was improved by adding animations, particle effects and sound.

The importance of getting feedback

This is the first game where I’ve worked so much on the little things that can make a game feel extra good. And I’m actually really proud of how it turned out.

I also ended adding more of these things, then I initially has planned. Mostly because my lack of experience in this area clouded my creativity in terms of what would really make a difference.

However, I posted gifs in the Unity2D reddit during the process. The users there were super helpful and fantastic to give constructive feedback . Not only did this help me get ideas on how to improve the game feel, but it also motivated me to do the extra work.

Bionic Carrots is now almost done. All I have left on my to-do list is to fix a bug in the high score menu and finish setting up the Itch.io page for the game.

I hope you enjoyed this post and maybe even get inspired to work more on game feel. I’m currently ready the book “Game Feel: A Game Designer’s Guide to Virtual Sensation” which covers the topic a lot broader than just a few animations and particle effects.